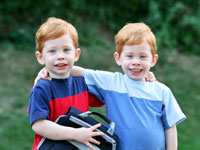 This test is used to determine if a set of twins, are fraternal or identical, and can even determine if the two children are in fact, siblings. The test is generally performed between two siblings. However, extra options can be added, such as testing an additional sibling. Testing for Paternity and Maternity options are also available.

What use is such a test?
Well, sometimes identical twins can share different appearances, or fraternal twins can look quite similar so unless it has been predetermined it can be difficult to know for certain. Usually the test is performed simply to fulfill personal curiosity, however there are health advantages as well. In the event that one sibling needs an organ or tissue transplant, the test results may be useful in determining whether one twin could be a donor for the other - generally identical twins are a perfect match in these types of cases.