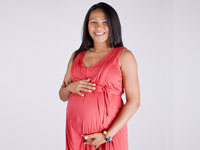 Non-invasive prenatal DNA paternity testing during pregnancy has been available since about 2002. Success rates and results vary among clients and is a new technique. Traditionally, prenatal testing is done either through ,CVS (Chorionic Villi Sampling) or Amniocentesis, both medical procedures done by an obstetrician and are quite invasive. In many cases such sample collection is difficult and due to the potential risks to the fetus many do not wish to attempt such sampling.

Through application of research technology it is now possible to determine the paternity of an fetus using a simple maternal blood sample and a simple DNA sample from the alleged father(s).

Other DNA samples from the alleged father such as, but not limited to, a hair with the root attached can also be used.

Once all samples have been received by the laboratory, an extraction procedure is used to separate fetal DNA from the maternal blood samples. Fetal DNA is extractable after 13 weeks fetal gestation.